Hale Keiki School is honored to have many children of active duty military. This also means that many of our students deal with deployments of parents and loved ones. In an effort to support our students and help them feel productive during a stressful time, HKS started the Patriots Club four years ago for our students affected by military deployments.

Enrollment in the club has grown every year, and all students in second through fifth grades are welcome to join, with priority given to students with a deployed parent. The club gives children an opportunity to actively support our military community. The club meets once a week and has been involved in several projects including holiday candy grams, the annual Heart of a Hero program, and performing at Pearl Harbor memorial ceremonies.

The weekly meetings also provide time to work on special individual projects to send to family members that are deployed. The club spends time each week talking about issues important to them. The students support each other with the unique perspective and understanding that only military children have. The response to the Patriots Club has been overwhelming. Service members have expressed their appreciation for club efforts and students in the club have grown and even thrived during difficult deployments with the help of peer support and the feeling of being needed.

In December 2016 and 2021, Patriots Club had the incredible honor of joining WWII veterans and Pearl Harbor Survivors at a memorial ceremony at the National Memorial Cemetery of the Pacific at Punchbowl Crater.

For more information on how your keiki can join this club, contact YPC Mentor Monique Raduziner with questions and inquiries.

Heart of a Hero

Since 2012, the Patriots Club has selected a special someone who possesses the "Heart of a Hero." The students in Young Patriots Club describe a hero as someone who is brave, honest, caring, selfless, and puts others' needs above their own.

Patriots Club awards each hero with a military-style ceremony and a luncheon in the spring. Club members delight in welcoming their honored guest on the HKS red carpet with proud salutes, and treat them to a performance of a HKS crowd favorite, "God Bless the USA."

Past Heart of a Hero recipients include: 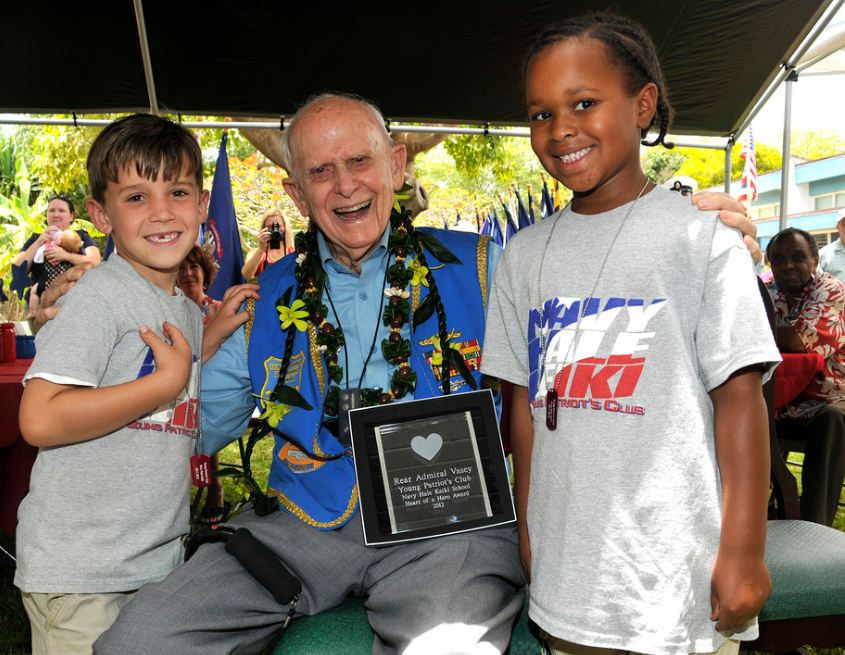 The first recipient of the Heart of a Hero award, Rear Admiral Lloyd "Joe" Vasey began his career in the US Navy as an original crew member of the battleship USS Missouri. Over the next 20+ years, Vasey would serve on both ships and submarines as a commanding officer. 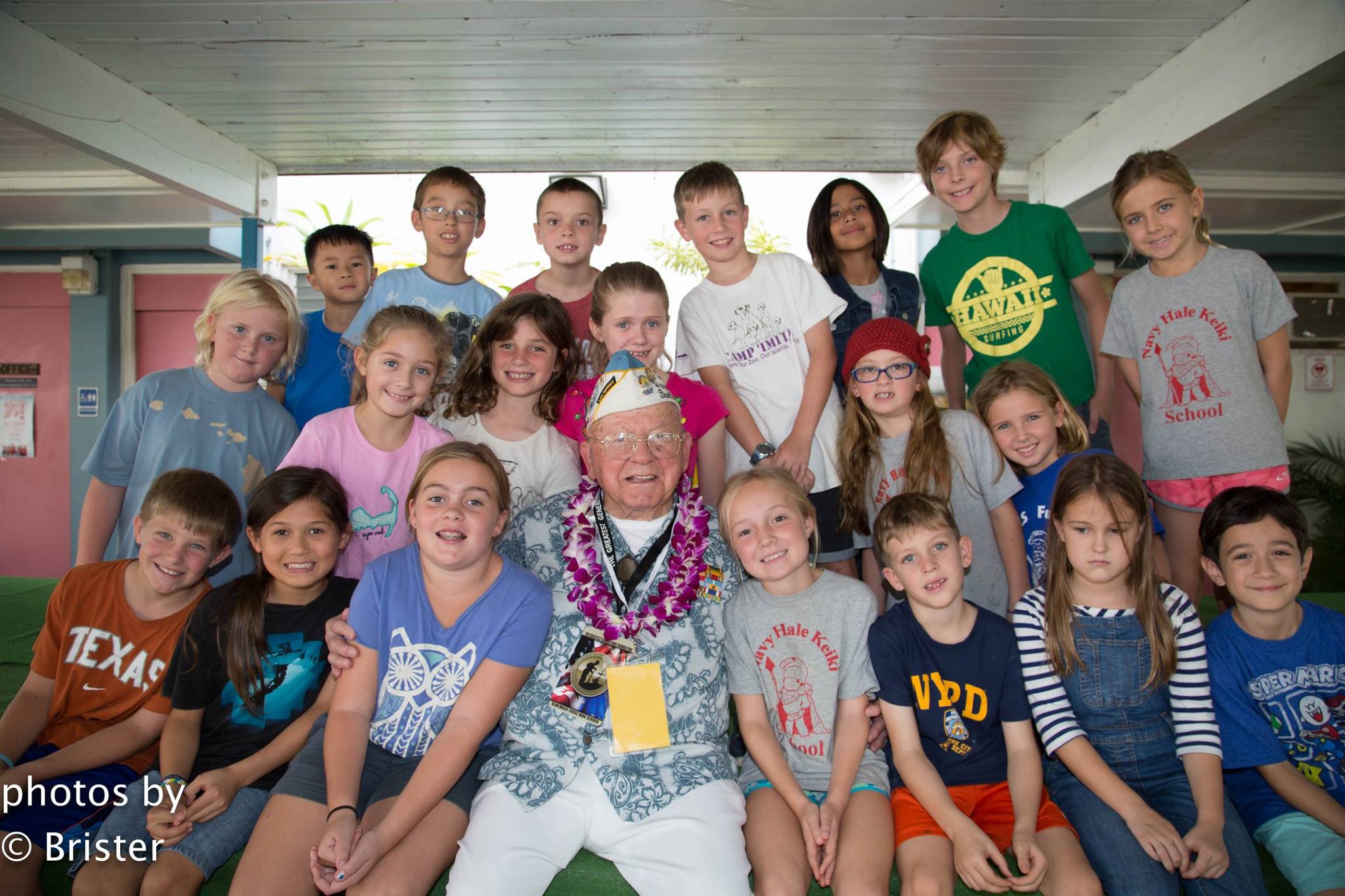 Pearl Harbor survivor and WWII veteran retired Senior Chief Quartermaster Michael "Mickey" Ganitch was the second recipient of the Heart of a Hero award. He was stationed on the USS Pennsylvania during the attack on Pearl Harbor on December 7, 1941. Mickey retired in 1963 after 23 years of service in the US Navy.

Mickey was chosen for his bravery and contributions to the military. He continues to serve as a hero in his local community of San Leandro, California. 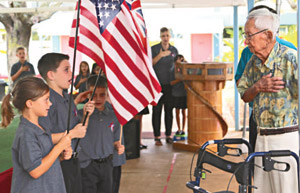 The child of Japanese immigrants, Takashi Kitaoka was born and raised in Hawai'i. He served in the 100th Infantry Battalion during WWII and received the Purple Heart, Bronze Star, and Congressional Gold Medal. He became the first Maui-born circuit court judge in 1962.

Kitaoka was selected as the 2014 Heart of a Hero because he embodies selfless service, continued giving, and tenacity. 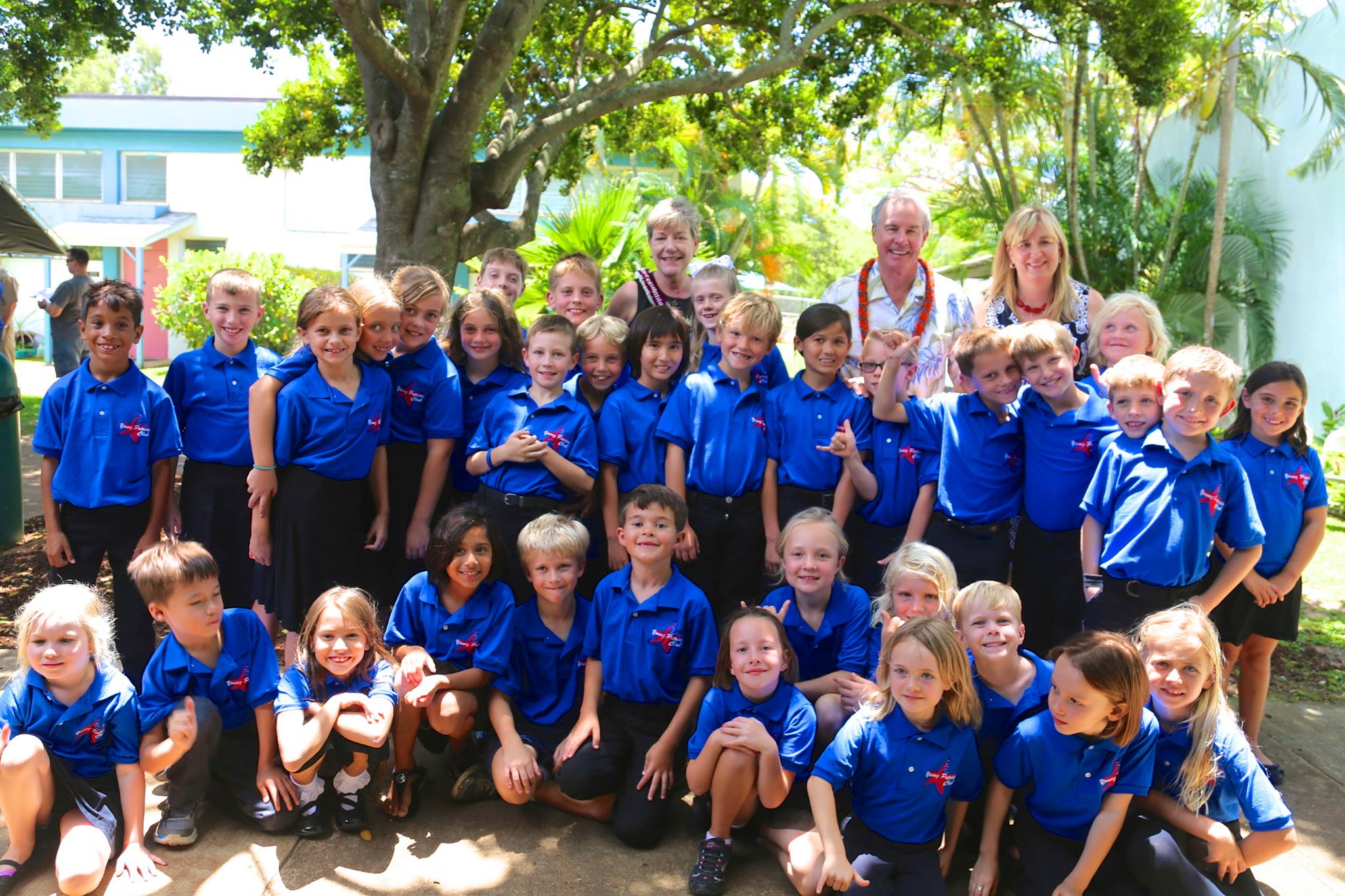 Admiral Thomas B. Fargo was the fourth recipient of the Heart of a Hero award.

After graduating from from the Naval Academy in 1970, Fargo spent a distinguished 35-year career in the US Navy. Among his many commands and achievements, Fargo served five assignments on attack and ballistic submarines. Fargo also served as the 29th Commander in Chief, U.S. Pacific Fleet, and as Commander, United States Pacific Command (PACOM), at Camp H. M. Smith, Hawai'i, for three years before retiring in 2005.

Admiral Fargo also served as the inspiration for the character of Commander Bart Mancuso in the film The Hunt for Red October. 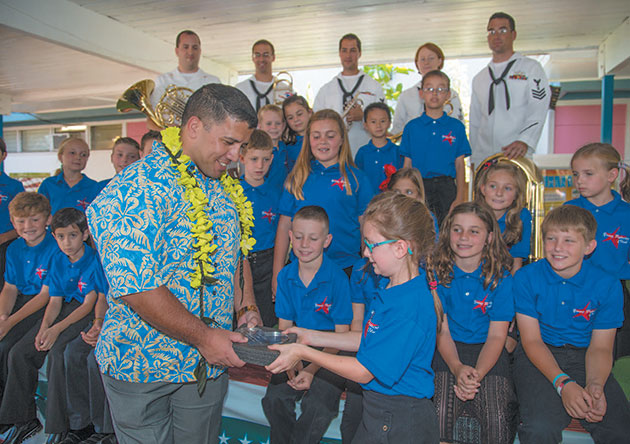 The 2016 Heart of a Hero recipient, Thomas "Tom" Kahalu Lee, Jr., is an Army and Navy veteran. After being honorably discharged from the Navy in 1999, he was personally moved to serve again in the Army following the Sept. 11, 2001 attacks.

Tom Lee is a recipient of a Purple Heart, after losing his right leg above the knee while serving in Iraq. Lee is a competetive paratriathlete and serves as the Military Affairs Liaison to Governor David Ige.

Maj. Patrick Miller, exemplified bravery and courage through his heroic acts in Fort Hood, Texas. In April 2014, while stationed at Fort Hood, Miller came face-to-face with an active shooter on base. The gunman had gone on a shooting spree before entering the building where Miller worked. Miller encountered the gunman in the hallway, where he shot Miller with a .45-caliber bullet, hitting him two inches below his heart and embedding in his back. While keeping pressure on his wound, Miller was able to make his way to his office and lock the door, where he called 911 with his free hand. Acting quickly to protect his fellow soldiers, Miller lead them to his personal office and locked the door. Miller was the last person shot before Military Police confronted the gunman, who then took his own life. Three were killed and 16 wounded in the attack.

Over 45 minutes passed with a lockdown in place before an ambulance was able to make its way to Miller’s location. Miller was forced to climb out a window to seek medical attention.

Miller is a 2015 recipient of the Soldier’s Medal. He is currently stationed at Tripler Army Medical Center (TAMC) where he serves as a resource manager.

"Students Present Award to WWII Navy Veteran"
Department of the Navy, navy.mil, May 19, 2012